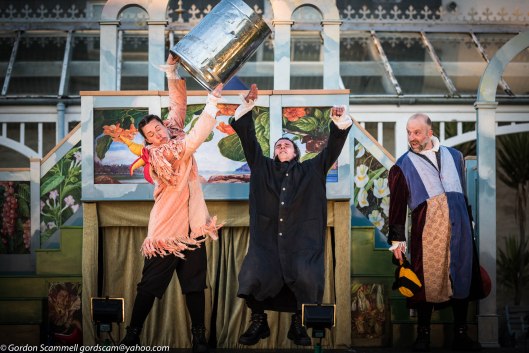 On the evening of Thursday 29th August, overlooking the lake at Raadhuis De Pauw in Wassenaar, Illyria will perform Shakespeare’s play The Tempest.

This is an annual tradition, and to make it more special CADS has arranged a dinner table under canvas with a good view of the stage, so that we can dine in comfort before the show. A group of 9 of us are already attending. The cost is 45 Euros per head for the dinner and the show combined. If you would like to join us, please send me an email.

About The Tempest
The magician Prospero is marooned on an island with his daughter Miranda. With the assistance of Ariel, a powerful air spirit he keeps in servitude, he conjures up a storm to shipwreck his enemies on the shore of the island. Inexorably they are driven towards the centre of the island to answer to Prospero, until Prospero learns that Miranda has met and fallen in love with Ferdinand, the son of his enemy. What will be greater? His thirst for revenge or his aptitude for forgiveness?The play, believed to be the last that Shakespeare wrote single-handedly, is lyrical, thought-provoking and raucously funny. More than 400 years after it was written it still has the capacity to surprise!

About Illyria
Illyria is an intrepid band of five actors who perform Shakespeare’s plays, entirely uncut, direct from the First Folio, the most authoritative edition of Shakespeare’s plays. It’s swift, it’s polished and it’s spoken beautifully – scholars on both sides of the Atlantic agree that Illyria’s performance style is the most authentic Elizabethan style. Since 1992 they have performed on nearly every patch of grass from Land’s End to John O-Groats – and also in Ireland, France, Germany, Holland, Switzerland, USA and Canada. They have won no less than 4 international awards, and have a well-deserved reputation for being, quite simply, the best.