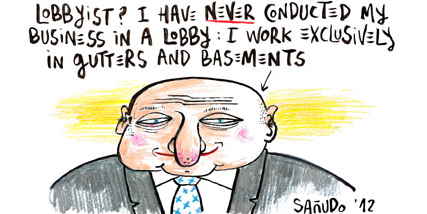 The Brussels Business is a self-styled documentary thriller about the shady world of corporate lobbying of the European institutions. Its main conspiratorial narrative rests on the assertion that the creation of the EU is a capitalist plot with no democratic legitimacy.

The film sets its tone with a frightening statement by Keith Richardson, Secretary General , European Round Table of Industrialists:

If you are not convinced by that, ask a man in the street and you are met with “Who Cares?”.

Much is made of the European Roundtable of Industrialists’ – a group of 40 European multinational chief executives – disproportionate influence on commission policy-making. The film dives into these murky waters and wonders why there is still the lack of transparency at the commission— a subject greatly unexplored by the press. Indeed, the world’s most powerful international legislator and the dominance which it exerts other national governments is seen as a niche topic by the media.

Transparency has only reached a voluntary status in both the US and the EU. In 1938, the US passed a lobby disclosure law because  President Eleanor Roosevelt was worried that Hitler was trying to lobby congress to prevent the US from entering WW2.  Even though this was mandatory, nine out of ten lobbyists argued that the term Primary Purpose was too subjective and so transparency became voluntary. Today the film wonders how much China is influencing decision making?

To all of you who feel that the EU is only of marginal relevance to your everyday life, watch this documentary.

The film is available to buy and rent on iTunes.