The hype surrounding this year’s winter forecast has been remarkable, unparalleled in 20 years of meteorology.

Driven largely by sections of the tabloid press and several small private weather companies, the idea that this winter could be the worst ever recorded has already become firmly planted in many peoples’ minds.

Except that it’s not.

The cold winter of 2011-2012 that some meteorologists have predicted for Ireland, England, Scotland, France, Belgium, the Netherlands, Germany and Denmark is in fact to be called unlikely. 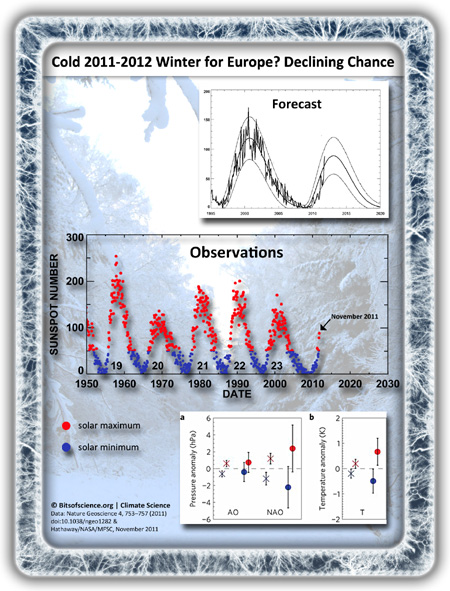 Judging by solar activity a pattern of consecutive cold winters [2008-2009, 2009-2010 & 2010-2011] has come to an end. High pressure blockades (over the North Atlantic, Scotland or Scandinavia) are therefore unlikely to prevail and for Western Europe there could even be another episode of some 5 or 6 years of mild and rainy winters ahead.

That’s what we conclude based on:

[*) Another contributing factor to a dominantly positive phase for the NAO index is current and expected SST anomaly, with relatively cold waters west of the Azores, favouring high pressure build-up there, and relatively warm waters off the US-Canadian east coast, favouring northerly Atlantic depression formation (especially during offshore winds).]

The theory is quite straightforward – and has been known to climatologists for many years: during the winter months solar activity influences air pressure patterns over the Arctic and lower northern hemisphere latitudes.

In this the number of sunspots is key. When there are few, northern hemisphere westerlies are weaker – and cold air is capable of escaping from the Arctic towards for instance the USA and Europe. Specific conditions for West Europe depend most on what is known as the North Atlantic Oscillation (NAO) – the air pressure difference between Iceland and the Azores. During a solar minimum, the NAO index tends towards a negative phase, with fewer depressions around Iceland. That means West Europe has less wind blowing in from the southwest and therefore less rain. In such a case high pressure can settle over Scotland or Scandinavia, allowing for wind to blow in cold and dry air from the east or northeast.

New research by a team of British scientists led by the Met Office Hadley Centre and published last month in Nature Geosciencehas reconfirmed this link between solar activity and European winter weather, which climate models can now reproduce. There is also a strong empirical correlation with temperature datasets stretching back well into the 20th century.

Now recent NASA observations show the solar activity is quickly picking up. As illustrated in the infographic we are now headed towards a new solar maximum, which is predicted to peak somewhere over the course of 2013. Ignoring other climatic factors [which are all much less easy to predict on such timescales] this gives a strong indication that there will be mild and rainy winters ahead – possibly numbering up to 6 in a row.

Perhaps some good news for the Arctic

For the Arctic sea ice this could actually hold some good news. The North Atlantic Oscillation is closely linked to the Arctic Oscillation – an air pressure pattern centred on the North Pole. If the increasing number of sunspots would bring the Arctic index into ‘a positive phase’ as well, then temperature isolation of the High North would in the winters months improve compared to recent years [which brought temperature records over Greenland and the Arctic Ocean – and a smallest ice extent last winter], perhaps allowing for some extra sea ice recovery. [That would depend on how a positive AO influences the normal winter Arctic thermal inversion.]